We often hear the term ‘Big Data’, but have you ever tried to picture what it really encompasses? The potential use for the staggering amount of data available today as business intelligence is virtually limitless. Yet surveys have found that many companies fail to implement its use in any meaningful way.

We’ve worked with a large UK-based retailer recently to address three common problems facing businesses today. But the approach that was taken was anything but common – rather than look at the impediments to change as problems, Albatrosa approached them as challenges.

Let’s follow, step-by-step, how we tackled the challenge with a single solution: Tableau software.

Our client had a classic problem: too much data, and not enough statisticians. That may not be an actual classic problem, but it is certainly a common one in business intelligence these days. The company was able to collect numbers on enquiries, sales, revenue, inventory, even on the stores themselves. This information existed as individual data sets, all stored in Sybase databases. Two approaches were taken to distribute the data to the departments that needed it.

One was done by utilising the Business Objects platform. This system worked very well for operational reports, but it was also problematic. Because they were so narrow in scope, the number of individual reports needed meant there were far too many to manage. They were mostly static. Though there was support for basic analytics, the lack of real interactivity limited their potential use. The system was also expensive. 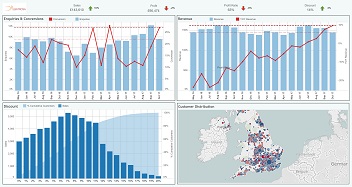 The second solution they found was to use multiple files to express these data sets and compose a sort of Frankenstein’s spreadsheet using Microsoft Excel. This allowed them to create basic dashboards, with limited functionally and which were limited visually. But with all of the data embedded in the spreadsheets themselves, the computers couldn’t handle trying to open them and crashed repeatedly.

The problem wasn’t just the data and files, though. Even when the information was able to be displayed, it was so layered and complex that the people reading it had trouble understanding it. Then they had to turn around and present reports based on these to heads of departments for decision-making.

It was time-consuming, inefficient, and altogether not nearly as productive as it could have been.

The challenge, then, was taking such an overabundance of information and shaping it into a recognisable, understandable medium. The chaotic nature of these data sets, their size and breadth and depth, were the primary characteristics that needed to be balanced. The company was well aware that such a solution was needed, and also knew that it was beyond their own expertise. 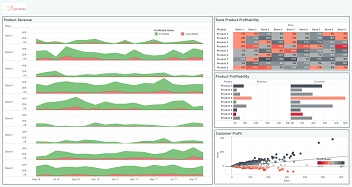 That’s when they found Albatrosa. The difference in approach is seen from the very first contact. We aren’t content to send out salesmen or technical advisers that push products and services at exorbitant prices. Instead, our team worked closely with them to understand their main pain points, what was driving them, and what they were aiming to achieve. We also asked them to bring us ‘use cases’, or real-world examples and samples of data they were collecting and what they wanted to do with it.

Then we delivered. There were two tools that we considered using: QlikView/QlikSense and Tableau Software. The two work in different ways. QlikView/QlikSense is an in-memory visualization tool and has to handle data processing locally on a separate infrastructure. Tableau works in a hybrid form, querying databases for data and then processing it in-memory. Given the significant investment in databases and hardware, the 5Vs (Volume, Velocity, Variety, Veracity, and Value) of their data, and their goal to move their analysts to fact-based roles, Tableau was chosen as the best option. A few days later, we were back, able to show them that a solution was not just possible, but faster and more accurate than any they’d used yet.

Of course, the best tools in the world aren’t very helpful if you don’t know how to properly use them. One of the primary goals was to give each area of the business real insight into how to make improvements. Today’s problem is different than tomorrow’s, so that insight needs to be adaptable, as well. Analytics could give a multitude of answers; now people needed to know how to ask the right questions.

In addition, the company also employed people that served multi-functional roles. While they may work in a business office one day, the next day they may be customer-facing or helping manage a store or just filling in at another location. Either way, additional roles means additional opportunities.

But to take full advantage of this potential, all employees would need training. They would need support, and that support would need to be ongoing.

Again, the approach was both familiar and unique. Standard training methods alone weren’t going to cut it. We started with classic classroom training, then embedded consultants that had business experience and expertise. Marketing team members have different needs than Salespeople, but training was also individualised according to relevance, aptitude levels, and day-to-day needs. It was at this level that employees learned most clearly how to define the questions Tableau’s visualised analytics could answer.

With this needs-based training approach, Albatrosa was able to help employees quickly get a handle on the things they most needed to know. They asked employees to provide cases that were the most difficult or time-consuming for them to deal with using the tools they had. By showing them the new way this particular problem could be tackled with Tableau Software, the employees built confidence in their own skill-level and were able to tackle even more complex tasks. This helped those that held multiple roles within the company especially.

All of this training, all of this potential being realised, and what was once considered to be impossible was now being accomplished in a handful of hours. The last challenge could really be called a positive one to have – what was the company going to do with all of this new information? How were they going to apply this data and make use of the analytics?

After all, visualisation doesn’t mean there’s less data. It means you can more easily see just how much data you have! The potential applications are wonderful, but are they truly realistic?

SOLUTION THREE: INTENSE AND VIBRANT DATA VISUALISATION
The immediate benefits for the company were built entirely around the new ability to see their data. Yes it was still a large amount, but now they were able to see the forest from the trees. This allowed them to reap incredible results.

Pricing data is an easy example. Not only do they have data on their own prices, but also on their competitors, historic prices, and future projections. That intelligence allows them to make decisions based on actual facts and information, not on stitched-together spreadsheets.

The key driver for the client was increased profits and performance. The aim was company-wide, from the corporate level to the stores to the individual employees. It covered campaigns, leads, convergence, churn, customer care, products, pricing, accounting, staff performance, revenue, every single part of the organization. Those goals were broken down into their constituent pieces to be re-examined and put back together.

Our client was able to optimise their campaigns at the city-level across customer acquisition, pricing, lead effectiveness, as well as churn and cost reduction. Each department had their own data dashboards to help them achieve these goals. Of course, not everyone in a company is an analyst. So we segmented the work into three sections:

Ultimately, that was the goal for Albatrosa. It wasn’t just rolling out tech, just teaching employees how to use it, or even just painting new pictures with existing information. The purpose of tableau in painting is to focus the viewer on the most important parts of the piece, to separate them from the drama, the chaos, the world going on around them. And that’s just what was accomplished for the client using Tableau software.

But the approach isn’t about Albatrosa. It’s about you: the client. It’s about your needs, your problems, your challenges. Our goal isn’t to push a product or a service, it isn’t to send a team of two dozen technicians to take over every meeting room you have, nor is it to tell you that everything you’re doing is wrong and that if you don’t do exactly what we say you’re going to fail.

Rather, our clients have data and information latent within. We have the knowledge, the resources, and the expertise to extract it and turn that data into the knowledge you need. In short, we love challenges.

For centuries it’s been a sign of good fortune to have an albatross floating on the air alongside a ship as it traverses the sea. As your own enterprise sets out into uncharted waters, let Albatrosa help you soar.

The Panama papers were published this week (https://panamapapers.icij.org).

We’ve made it easy to visualise the data in Tableau by creating a data model that links the various tables.